Partly as a follow-up to Not extinct…

30 May. “The redox switch hypothesis for the first cyanobacterium – and for the advent of free molecular oxygen”. Physics Across Disciplines Colloquium. School of Physics and Astronomy, Queen Mary University of London, UK.

Fascinating half-day meeting. Thanks to the organisers. What a splendid department that must be. Would have loved further contact.

A mixed bag in the latest episode of this longstanding annual meeting. The emphasis seems to have moved away from plastids to such topics as biofuels. On which subject I am in full agreement with Hartmut Michel and the late and much missed David Walker. For many reasons, not just its reasoned appraisal of our options for renewable energy, I recommend Brian Cox’s wholly splendid BBC Two – Human Universe, What is our Future? As I write, there are “4 weeks left to watch”. I’d love to drive a Tesla.

Extraordinary meeting. I don’t know where the idea of inviting me came from – someone must have tracked down my e-mail address from Allen and de Paula, Biochem Soc Trans 2013, and invited me to speak to its title. There was interest in my presentation, including by clinicians, with offers of collaboration and requests to send samples for analysis. I also stood in as chairman for a session that ended with a presentation, by Mats Brännström, Gothenberg, on the first demonstrably fully successful human uterus transplant, reported the week before in Lancet. Later he asked me about our source of mitochondria, but seemed rather to lose interest when I told him it was fruit fly, zebrafish and jellyfish. Throughout the meeting there was simultaneous translation. The translation from Italian into English was fluent and idiomatic, including phrases such as “the trick is”. I don’t know how they do that. I have no idea how well my presentation rendered into Italian. A speaker from Yale University was particularly enthusiastic about our work so I introduced him, by e-mail, to the lead experimentalist, while making clear the contributions of all co-authors to our three most relevant 2013 papers. If only these opportunities had come a year or two earlier, or if I still had the immediate prospect of entering into collaboration. I’ll just have to keep trying.

What can I say? If ever anyone refers to a research-led university, just ask them “Do mean like Caltech…?” 900 students in total. Almost all buildings are named laboratories, prefixed with the name of a benefactor, or Nobel prize winner, and suffixed with the name of an branch of scientific enquiry. Imagine the change of mindset required for “The Joseph Priestley Laboratory of Chemistry” or “The G. E. Fogg Laboratory of Biology”. The Caltech campus is superb. The guest house – The Athenaeum – has busts of Einstein and Pauling on the stairs. I spent Tuesday morning talking with a young faculty member recently granted tenure, and three ferociously bright lab members. Outstandingly good questions, which made me think. I am not sure I convinced anyone about the redox switch hypothesis. I tried. I reflect this means there is something left for me to do. Under extreme jet-lag I also met my friend Michael Russell and his wife, Liz, on Monday night. In some sort of apologetic tone think I said something like “That’s all very well for someone over here in paradise…”

Two days of mostly great science, and thought-provoking ideas. Highlights included a closing talk from a philosopher-of-science from Sydney, Maureen O’Malley. I could write much more. The NAS will apparently post video recordings on-line in due course.

See this blog’s Leeds meeting of NOR on HGT and LUCA.

Coda. I suppose this is more of a real blog, while too much for one post. I have still to write to say thanks to many named or alluded to, above, as well as to other participants, all of whom it was a pleasure to meet. Also to hosts who were generous in the extreme. As evidence of sustained activity, there is much more, and more in the pipeline. 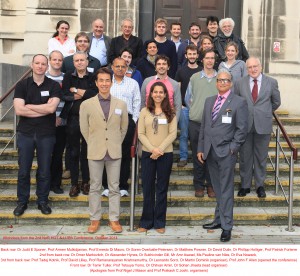 An Open Letter from York Academics to the Vice-Chancellor, Registrar and Director of Human Resources

Who is accountable? And to whom?